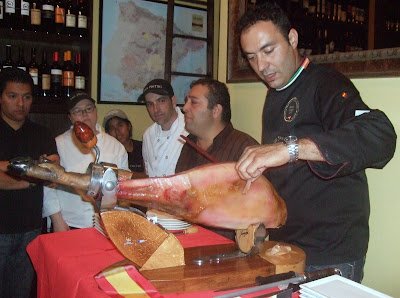 Slicing off the first layer of fat to reveal the meat....

On Thursday, my staycation continued with a vigorous bike ride from Santa Monica to Playa del Rey, and then an evening of ham tasting...just the thing for the end of Yom Kippur. La Espanola Meats, the only California distributor of the Spanish delicacy, hosted the tasting at Bar Pinxto with Spanish wine purveyors Antalya Imports and guests including Alain Giraud. Nico Jimenez, one of the 10 ham cutting masters in the world (who knew there was such a thing?) and winner of the Prosciutto d'Oro award, flew in to demonstrate how to cut the ham. It's worthy of some very special treatment, as each one goes for about $1500 or around $100 a lb. 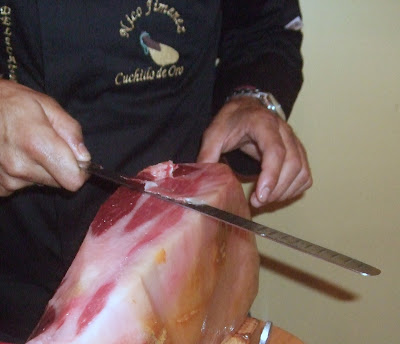 Bar Pinxto has been serving the jamon iberico for several months, but the Jamon Iberico de Bellota, from black-footed pigs that feed only on acorns and then cures for more than three years, is a real prize. We tasted slices from various parts of the leg, and all had fat that melts instantly in the mouth and a complex, slightly nutty flavor. Unlike some prosciutto, it's not at all salty, just porky, slighty chewy and full of the free-range flavor of the Salamanca terroir. Bar Pinxto owner Joe Miller said he will likely charge around $25 a plate for the rare treat...definitely pricey, but worth a try if you can swing it. Of the Spanish wines we tried, my favorite was the Deobriga Seleccion Familiar 2004, which is 90% Tempranillo and 10% Graciano. Or if you're near Harbor City, stop in at La Espanola, where a 4 oz. package is $25 for Jamon Iberico or $30 for Jamon Iberico de Bellota.
at 10:06 AM