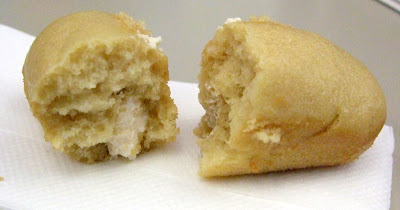 Can you tell I'm working on a vegan round-up for the Los Feliz Ledger? Today's fake meat was courtesy of the Vegan Spot, which replaced Cardone's short-lived deli on Sunset. Outside, the Vegan Spot sign looks cheery and rather generic, while inside, the spare storefront sports a bright, artsy mural and not much else, looking more like a juice bar than a full restaurant. In back, the old neon "mozzarella" sign leans forlornly against a wall near the restroom, waiting for the day when dairy might be allowed back in. The menu's fairly large, with meat and dairy-free versions of things many vegans didn't even know they were missing, i.e. Philly cheesesteaks, roast beef sandwiches, turkey dinners...and Twinkies. There's also salads, breakfast (although they open at 11), and chocolate banana or peanut butter and jelly shakes.
I had a pretty good ABLT -- I've had better vegan versions with crispier tempeh bacon, but the secret sauce melded with the avocado in such a perfect way that it redeemed the whole sandwich. And the coleslaw was woefully underdressed and/or underseasoned, but a shot of the wine vinegar I keep on my desk remedied that. As a shameless omnivore, I didn't feel truly qualified to judge the food at the Vegan Spot, so I asked a vegetarian colleague to try the Philly Cheesesteak (below). 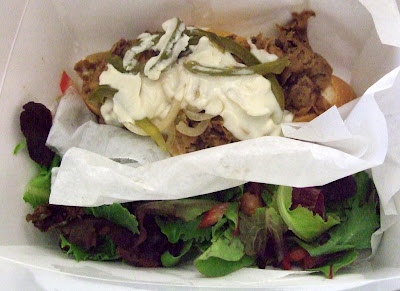 Here's what he said:"The Philly Cheese Steak was great. But you have to remember this is coming from a guy who hasn't eaten a Philly Cheese Steak in 15 years. Vegan cheese is a tricky thing. It doesn't like to melt, and when it does, it tends to melt in a very unappetizing manner. Their cheese, on the other hand, was great. I think they make their own 'meat,' which surprised me. It wasn't bad. It was just, considering the effort, a tad unremarkable."
Now for the Twinkie: For me, this was a healthyish, not-too-sweet pastry to have with my morning tea, although the specific gravity was somewhat heavier than an actual Twinkie. Here's what my colleague said: "I haven't eaten a Twinkie in more than a decade. And for that singular accomplishment I forgive all shortcomings. I'll be back."So there you go. Fun to check out for the veg crowd, but the omnis might be bemused by the faux roast beef. Service is of the freak folk variety...a bit dreamlike, but friendly.
Vegan Spot
3206 W. Sunset Blvd.
(323) 667-0116

It scares me to think what ingredients go into that fake Twinkie (which is probably as scary as the real thing). Most likely a lot of oil, especially for the filling. While I think it's a novel idea to make junk food vegan, it seems to somewhat defeat the whole purpose of a healthy, vegan lifestyle.

BTW, it seems your site is set so that one cannot navigate out of it by simply pressing the "Back" button; kind of frustrating...

Aren't really Twinkies vegan? Do they have some egg? Is Polysorbate 60 an animal product?

You would think they could easily make them vegan or at least vegetarian, but ingredients include "vegetable and/or beef fat" and eggs.

claire: Not all vegan food is aiming to be healthy, just tasty and free of animal ingredients. Some vegans eat and want junk food too!

The vegan Twinkies are made with nonhydrogenated shortening and nonhydrogenated margarine. The girl who makes them, JennShaggy, is a professional vegan baker and the recipe is based on the version from the Vegan Lunchbox.