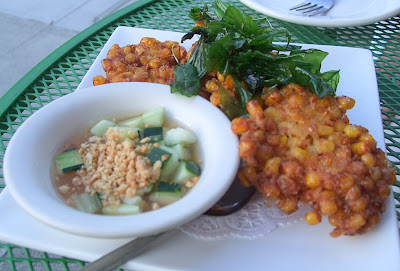 The United Nations, according to this L.A. Times editorial, has called for everyone to take a meat holiday once a week. I'm fine with that, in fact I could probably go three or four days a week without feeling much pain, until the carne asada taco craving hit. (Memo to L.A. Times: most vegetarians would consider fish sticks a form of meat, but whatever.)
If you're living on the near-Eastside, you've got more meatless restaurant options than pretty much anywhere: Elf, Pure Luck, Vegan Spot, Flore, Cru and a myriad of Thai veggie places. I had been deeply suspicious of the Thai places -- they seem to spring up like weeds in every minimall, and then you never hear of anyone going there. But I had also heard that Bulan Thai on Melrose was a cut above the other Thai veggie places. Then, voila, Bulan opened a new branch on Santa Monica in that funny little pie-shaped spot where Suriyo used to be.
The food at Bulan is nicely-presented, fresh and full of flavor. Like any Thai place catering to us farang, the spices are toned down a bit and the flavors tend toward the sweet, but the general care in preparation makes Bulan stand out. 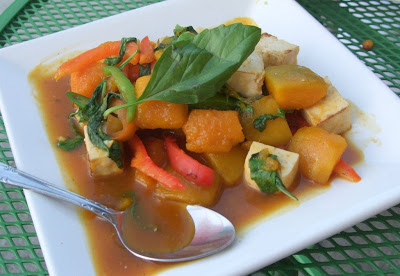 We tried the corn cakes, similar to the usual tod mun fish cakes appetizer, basically just corn barely held together with some binder and deep-fried until slightly chewy. Kind of different, but I love anything fried, and I love corn, so I was fine with it. The Busaba pumpkin special with pumpkin and tofu in a basil-perfumed curryish sauce showed that vegan dishes can rock with flavor just like meat dishes, although not all vegan restaurants achieve this. Kow soi noodles were made with crispy (fried) noodles instead of the usual thin rice noodles, but the rich coconut sauce and array of additions on the side like pickled cabbage made it a winner -- and there was a welcome hint of spice, too. 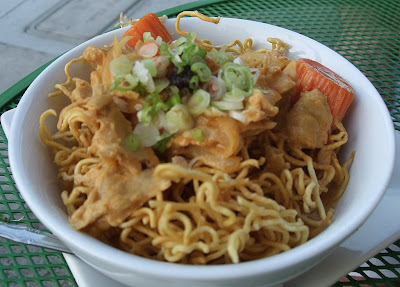 Matt thought the faux chicken in the kow soi was a dead ringer for the real thing, but you can get it with tofu if you're scared of fake meat. Bulan is a little pricier than the average Thai joint but the quality of the food seems worth it. I'll definitely be back for my meatless day, or any day when I feel like eating a little "cleaner."
Bulan Thai (delivery also)
4114 Santa Monica Blvd.
323-913-1488

Well you'd hear about people going to these other vegan Thai places if you read my blog ;) Many of which I'll add, are delicious, run by great people and are far from sketchy!

Just had my first trip to Bulan (on Melrose) too and will be writing it up soon. By far some of the tastiest Thai food I've had in town, vegetarian or otherwise. We loved the Kow soi crispy noodles. I really wanted to try the corncakes as well but unfortunately they aren't vegan.

I can see why everyone raves about them. Delish!

I really do think that Bulan is the best Thai in LA- meat or no meat. Not greasy, but full of flavour. I love their fried banana w/ coconut ice cream to top things off. Yum.

i ordered delivery from bulan for the first time the other night. it literally tasted as if they made it in my kitchen...incredibly fresh & delicious. so glad to have finally found an excellent thai place on the east side.