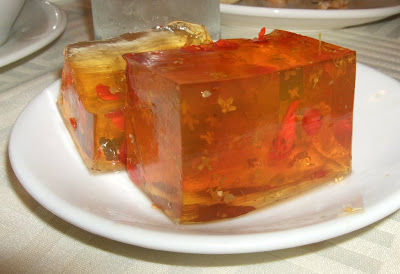 My favorite dim sum for several years has been at Sea Harbour in distant Rosemead. I soon grew to prefer ordering from a menu with pictures to flagging down a cart, especially since I've been flagging carts in Chinatown since I was just a wee lass. So when I heard that several chefs or other personnel from Sea Harbour had decamped to the new, closer King Hua in Alhambra, I was itching to try it out. 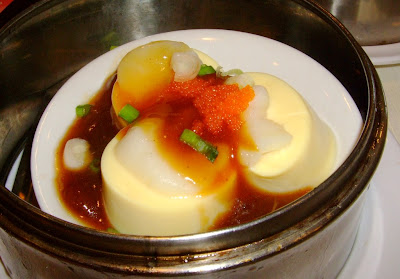 The only trouble was that it was about 110 degrees in the San Gabriel Valley the week I heard about it, as Jonathan Gold noted in his review, which just didn't put me in the mood for dim sum. So we finally convened a small group to eat there, only to find Abby's much larger Pleasant Palate group also sequestered at the rear of the restaurant. It's a large place with a huge parking lot; even though we made reservations, there was no "sweating hordes," as Gold described, waiting at 11 am on a Saturday.
King Hua was much better than I had expected, although some items perhaps lacked the delicacy and finesse of their Sea Harbour counterparts. The menu is identical, with all the greatest hits like eggplant stuffed with shrimp and shark fin dumplings. Kathy thought the pan-grilled pork with dried scallop bun was one of the best dim sum items she's had and we all liked the bizarre "seafood salad roll," which is basically a blob of shrimp and mayonaise deep fried in breadcrumbs. I thought fried corn pastry were going to be my new favorite food, but they were too chewy with rice flour to truly delight. Rice noodle with chicken and bitter melon was bitter and slimy but in a very good way. Steamed egg tofu with scallops, my favorite dish at Sea Harbour, acquired an oddly murky brown gravy. 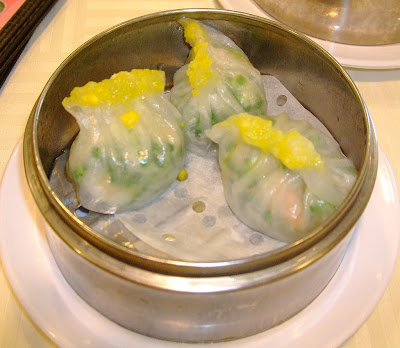 Have you ever found a dish you love more than the way it actually tastes?That's how I feel about wolf berry pudding. It's got wolf or goji berries, which are healthy, it clears the palate after salty dim sum, and it looks like the inside of a lovely little aquarium. Somehow it doesn't matter that the actual flavor of it is just sort of sweetened clear jello.
Verdict: Well worth a try if you've exhausted the other dim sum choices or are just looking for a less-crowded place. Also handy if you want to hit Fosselman's, Target or Costco afterwards.
King Hua
2000 W. Main St., Alhambra
626-282-0905

"Have you ever found a dish you love more than the way it actually tastes?"

For me, it's caramel apples. I love caramel, and applies might be my favorite fruit, so one would think the combo would be magnifico. Hardly, at least not for me.

while i LOVE the sound of duck a l'orange, it never tastes good... ditto to soon doo boo.

King Hua looks like it's doing "haute" dimsum in the line Elite/Triumphal, but a wee bit more refined?

Ooh, a new dim sum place we have to try! Thanks!