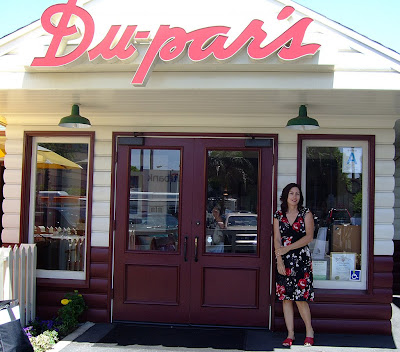 Hamilton starts the tour at the refurbished Du-par's

When mystery author Denise Hamilton set out to write her latest novel, "The Last Embrace," she didn't want her characters to only frequent old Hollywood standbys like Musso and Frank and the Pacific Dining Car. Hamilton, a former L.A. Times reporter and successful novelist, is also a major foodie, who breaks into every conversation with a tale of the amazing turkey eggs she picked up at the farmer's market or the homemade jams they make at the Russian deli she took me to on our last literary tour of L.A. 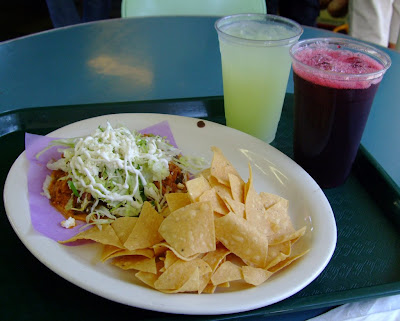 Cochinita pibil tostada, aguas of cucumber and jamaica at Loteria

So she carefully selected the bars and restaurants that appeared in the story, although the stock of spots that were around in the 1940s is dwindling each year.
"The Last Embrace" is a noir thriller inspired by the story of actress Jean Spangler, who disappeared in 1949, just two years after The Black Dahlia was found. Hamilton and I set out on a recent tour to see some of the places the characters eat and drink, while chatting about her inspiration for the book. 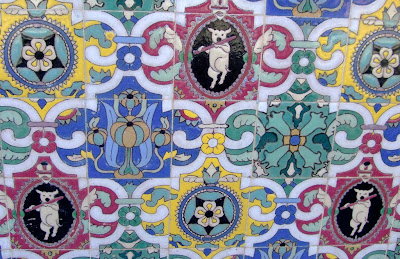 Pig detailing on vintage tiles at the Pig 'n Whistle

Our first stop was Du-par's and Farmer's Market, where the real Spangler was last seen buying produce the day before her torn purse was found in Griffith Park. Although the starlets of 1949 were likely stuck eating diner food, we decided to take advantage of today's wider choices and had a cochinita pibil tostada, huevos mexicanas and cucumber and jamaica drinks at Loteria Grill.
Hamilton explained that the Spangler had been mixed up with notorious gangster Mickey Cohen, who figures in the book. But she also incorporated a fascinating plotline about stop-motion animation, inspired by the work of Ray Harryhausen. 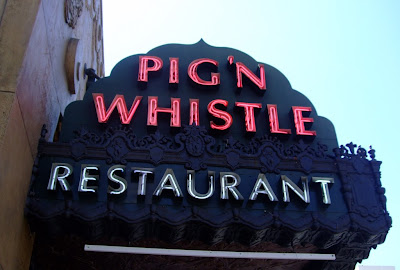 Though closed for many years, period details survive from the Pig's early days

Sci fi enthusiasts like Harryhausen, Ray Bradbury and Forrest Ackerman used to meet up at Clifton's Cafeteria, which is also mentioned in the story, along with the original Canter's in Boyle Heights and Taylor's Steakhouse.
We moved on to the Pig 'n Whistle, which of course was closed for more than 50 years until Chris Breed restored the building and re-opened it next to the Egyptian Theater. The manager showed us the back room, where studio execs and tout Hollywood used to strike up jam sessions. Of course, the book also mentions plenty of long-gone nightspots like the Trocadero and Slapsy Maxie's.
The book's protagonist, a former OSS female spy, spends a lot of time researching Spangler's disappearance in phone booth at a drugstore lunch counter. I spent plenty of my childhood at similar lunch counters at Schwab's, Newbery's and Owl Rexall, but they're all gone now. 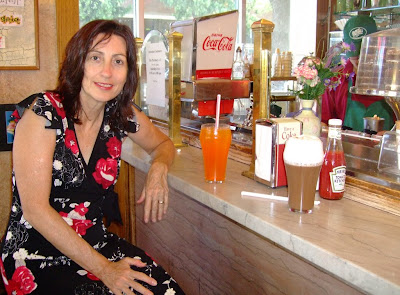 Hamilton tries an orange phosphate at the Fair Oaks Pharmacy

So we stopped by the Fair Oaks Pharmacy in South Pasadena for excellent orange phosphates and chocolate egg creams, just like the femme sleuth would probably have ordered. I thought that might be the only counter of its type in the area, but L.A. history expert Chris Nichols later told me about Canoga Park's DeSoto Pharmacy soda fountain, another well-preserved piece of history.
Too bad it was a little early for a drink at the Frolic Room or the Formosa (they liked their cocktails in those days!). But I felt like I had revisited all the historic spots after reading "The Last Embrace," which deftly weaves together the end of the studio system, the plight of female spies after the war, Hollywood gangsters and their world as well as the real actress's rumored involvement with illegal abortionists and Kirk Douglas. It's a must-read for anyone who wants to savor the era of the Black Dahlia and Raymond Chandler against a backdrop of historic L.A.
at 9:40 AM

ooh, great post! I love reading Denise Hamilton's books for all the LA landmarks she mentions. Should have guessed she was a foodie from the drool-inducing descriptions of Russian food in prisoner of memory.

Thanks for the heads-up on the book! Sounds fantastic.

I loved J.J. Newbury's. Are there any of those left? The Micky Fine pharmacy in Beverly Hills still has a great food counter where you can get awesome spot-on breakfast and lunch...

Can't wait to get my hands on Denise's latest! I first heard about her through your blog and she has become one of my favorite writers. I have been pacing myself through her novels, so I don't burn through them all at once! Thanks for introducing me to her work.

Book is great, and it was really exciting and gracefully done the way the history of L.A. and the movie biz was woven in.

And great idea, this tour, Pat!