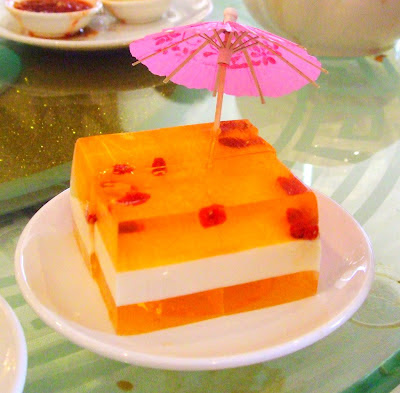 I think people who say there's no good Chinese desserts must not have tried very many of the wide range of desserts available around the San Gabriel Valley. It's true that chocolate is rarely (never?) seen, but there's a huge variety of tropical fruit flavors, green tea, coffee and other tastes available in forms ranging from delicate puddings to rainbow-hued gelatins, airy cakes and even peanut butter coconut pizzas (photo at right). 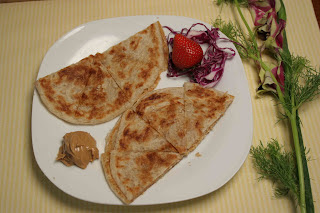 Each time I go to Sea Harbour, there's always a few varieties of dim sum that are new to me -- this time there was an unusual fluffy barley bun filled with cooked milk that approached dessert territory. Also straddling the line between savory and sweet were crunchy, salty-sweet water chestnut cakes, crispy fried durian dumplings and flaky egg tarts.
The night before, we tried Tasty Garden in Alhambra. Although we only had typical dinner entrees such as shrimp and chicken with water chestnuts, Chinese broccoli in ginger sauce and addictive fried tofu with spicy salt, the Tasty Garden menu is full of junk food delights like Chinese waffles (photo bottom right), green tea pizza and the aforementioned peanut butter coconut pizza, as well as a more refined rose pudding with fresh peach. One of the Chinese desserts that doesn't do it for me though is that sweet, clear bean soup sometimes given at the end of the meal -- and I have a feeling the hot seaweed and green bean dessert might not be quite my thing either.

What other Chinese desserts can you recommend?
at 9:56 PM

Ooo...thanks for the recommendations. I love Asian desserts.

I've been reading your blog for a couple years -- I started back I was living in Japan and missing food in LA -- and think it's great.

I recently started blogging about LA restaurants/markets/food on my site. (It was all about Japanese food before.) Check it out if you have the chance:
www.deliciouscoma.com.