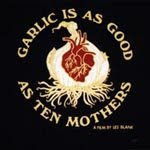 Friday, March 21, the Les Blank film series at the Silent Movie Theater features "Yum! Yum! A Taste of Creole and Cajun Cooking" and "Always for Pleasure." Les Blank's screenings often involve some tastings during the movie, if you're as lucky as I was to sample lots of roasted garlic during a screening of "Garlic is as Good as 10 Mothers" in Berkeley some years ago.

Saturday March 22: Daal 101 Workshop 11am - 1pm $65
It's Bollywood weekend at Machine Projects, which is holding a traditional Gujarati (western India) meal with cooking master, Saroj Sukhadia. This workshop is totally hands on, giving participants step by step insight into making daal (a nourishing lentil based soup), a potato dish, cinnamon basmati rice, and cilantro chutney. $65 includes all ingredients, recipes, and of course a full lunch.
Sunday, March 23: Can't deal with driving to South Central to taste BBQ from the famous First Assembly Baptist Church? Pair the 'cue with cabs and merlots at Silver Lake Wine's Easter Sunday tasting, 3 pm. $20.
Friday, March 28 is the last night of the Les Blank film series from Cinefamily at the Silent Movie Theater. Friday's program features shorts "Running Around Like a Chicken With Its Head Cut Off" and "Chicken Real" as well as venerable documentarian Blank's latest film, the feature-length "All This in Tea," about tea expert David Hoffman.
at 8:39 PM