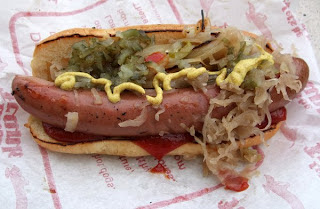 It's not quite as interesting as a week with Jonathan Gold's stomach...but for lack of any formal reviews this weekend, here's 36 or so hours with Pat's stomach. Every other Saturday, I'm stuck in the vicinity of La Cienega and the 10 for an hour and a half. The immediate area is a food wasteland, with nothing but Samurai Sam's within walking distance. But I've found a wealth of lunch places within a five or ten minute drive of there. In the past I've hit Cafe Surfas, Meltdown, JJ's BBQ, The Point. Today I had hopes that maybe Father's Office's new location had secretly opened and I would be invited to sneak in and try it. No luck -- the Let's Be Frank lady says she thinks April 15 or so looks more likely, and reports that FO will be open for lunch Friday, Saturday and Sunday, yay! Some nice benches for the patio had just arrived, and as Laist pointed out, the plywood is down. I was planning on going to Dolce Isola for lunch, but couldn't pass up the grass-fed dogs and organic sauerkraut, so I surrendered to Let's Be Frank. I love the concept of a basically guilt-free hot dog and the freshly grilled onions were excellent; I'm not sure I was crazy about the concept of a low-sodium hot dog, which to me lacked a meaty punch of flavor. Next time I'll try the pork brat, made from pigs that were lovingly coddled and sung bedtime stories to before butchering, or something like that. I eventually made it to Dolce Isola, which is the bakery that used to be next to the Ivy and still supplies their desserts. On an odd block of Robertson shared by Midnight Records and the Mystic Emporium, Dolce Isola is a little slice of European charm with funky antique chandeliers and weathered French cafe chairs. In addition to freshly-baked baguettes, cookies, croissants and pies, there's a selection of sandwiches like Louisiana crab cake, Croque Monsieur and Capri meatball. And coffee, and gelato. 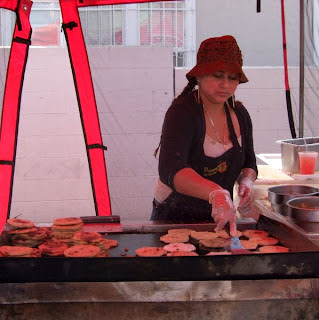 The oatmeal cookie was particularly tasty, and there's a refreshing lack of attention to cupcakes. We did pick up a miniature caramel spice cake, but a gremlin in my house devoured it before I could report on it.

I never got over to Echo Park this weekend to check out the new restaurant The Park -- I only got as far as the Atwater Farmer's Market. Flan King has joined the lineup of stands, and the pupusas looked too good to pass up, so I tried a nicely-griddled cheese pupusa con todo -- just the thing for a blustery Sunday morning. And now I must go roast a chicken, so that is all.
Dolce Isola -- 2869 S. Robertson Blvd. 310-776-7070
Let's Be Frank -- across from Father's Office on Helms, Culver City
The Park -- Sunset and Douglas, Echo Park
at 4:51 PM

Have you tried that bbq place on the west side of where fairfax meets la cienega? I can't remember the name, but it truly was mouthwatering. And, they serve this upside down cake that's so moist I dare you not to order two.

Thanks for the mention about our set up in Atwater Farmer's Market. Great neighborhood of people, very friendly. Please stop by on Sunday and give our flan a taste.