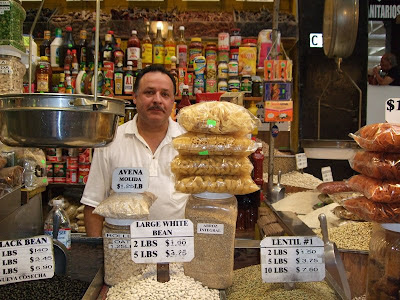 This guy sells the killer tamarind balls, 4 for $1

All morning during the endless waiting of jury duty, I imagined scallop tacos and tamarind balls, two of the delicacies I knew were awaiting me at lunchtime. The hour and a half lunch break is more than generous, so after a brisk walk to Grand Central, I had plenty of time to look around. I was worried to see that there seem to be several more empty stalls than the last time I was there. What will become of them? 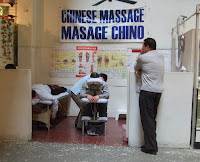 A Chinese massage operation has moved into one (I recommend trying the female masseuse; I'm a bit bruised today from the male masseur.) 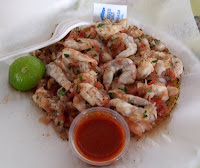 Since people actually live Downtown now, in addition to tons of office workers, couldn't there be a Langer's stand? A Pink's stand? A Tommy's stand? Perhaps a change of pace from Mexican and dubious Chinese?
Anyway, lunch at Maria's Fresh Seafood was certainly one of the better $5 lunches I've had lately -- when you order a scallop taco they scoop up some raw scallops, bread them lightly with cornmeal and fry them right in front of you. The shrimp tostada had a huge quantity of super-fresh shrimp for $2.50 -- so much that you should probably get extra chips to soak it up. Before my Chinese chair torture, I picked up some tamarind balls at one of the many Mexican mole/chile/spices stands -- despite having many surprise tamarind seeds at the center, these are about my favorite sweet of all time, and Grand Central is the only place I ever see them.

I ended my break with a pretty decent espresso from the fresh juice/coffee/boba place, which still didn't stop me from feeling drowsy the rest of the afternoon. I hope tomorrow's jury duty, when I'll probably strike out towards Little Tokyo, will be just as tasty.
at 8:59 AM

I wish I could remember the name of the place I went to on Jury Duty last year in Little Tokyo. It's on 2nd Street on the back side of Japanese Village Plaza (between the crosswalk & Central). It was just a lunch place, very crowded. I had fantastic salad bowl with tuna ... I've been back twice now and I still can't remember the name (I had a very long jury duty process).

They've got deliciously yummy tamarind balls and other such tamarind treats on Olvera St. too. I recently got a little treat from one of the vendors there which was made of tamarind, yam and sugar. So good... after eating the whole thing I was in a sweet coma for the rest of the afternoon!

Cybele, that sounds like T.O.T. but they have a C now. Was a great lunch place...

What does a Tamarind Ball consist of? I am so interested?

Tamarind balls are mushed up tamarind fruits and sugar, rolled into a ball with the large seeds included. I don't know why they can't just make them without seeds, but maybe someone likes them. They're sweet and very tangy in the best way.

The BEST part of jury duty downtown is lunchtime!!! You can hit Philippe's too!
Sometimes I like to go to the cafeteria at the Cathedral. The food is just OK, but the gift shop rocks! Have you tried the little tin of "sacra-Mints"? These make excellent gifts for your Catholic friends!

There's another place, in the middle of the Tokyo Plaza, (sort of diagonal from CeFiore?) which bills itself mostly as a sake bar, but has a sort of mix-and-match menu similar to TOT's; I'm drawing a blank as to the name, though. Also, if perchance the judge lets you go as early as 11, you can grab a DASH and see if you can get into Gen. Also, I'm curious as to your impression of Pastagina!

I live downtown, so if you are on next week and want to meet up--let me know.
KAte C.

Central market has one of the best $5 burritos I've ever eaten. I live in Florida, however, I frequent LA a couple of times a year, and I never fail to go into Central Market for the food when I'm in LA.