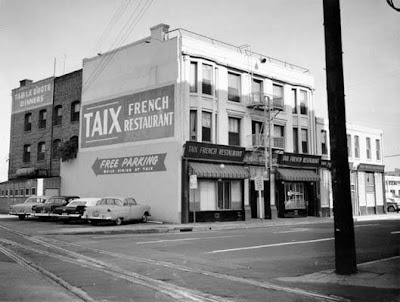 It must have been really cool when L.A. had a French quarter...probably not quite New Orleans, but still. I thought the French quarter was near new Chinatown, since the French hospital was there until recently. But apparently the original location of Taix French Restaurant was at 321 Commercial St., where the twin towers prison is now. I like its modest European look, much Frenchier than its new location on Sunset which opened in 1962. Is there anyone out there who remembers the original location?
at 8:37 PM

Oh yeah...it was my grandfather's favorite place to eat. We sat at long communal tables (very much like The Pantry and Philippe's). Dinner was served family style, large plates of bread, carrots/celery/radishes on ice, big bowl of soup w/ladle, green vegies, mashed potatoes. I do remember them bringing your main dish on a separate plate. The style of food was very similar to many of the Basque restaurants still found in Bakersfield today.

Once in awhile we went to the fancy version of Taix's on Sunset, but this was for special occasions only.

My grandfather, L.A. Bloom, was an attorney in Los Angeles from the late teens thru the mid-1960's. His office was downtown. He was instrumental in helping many builders of the day obtain permits for building offices, houses, etc. In fact, Bloom Street, off No. Main St., north of Vignes, is named for my grandfather.

Thanks for the memories.

321 E. Commercial St. isn't the Twin Towers site - it's south of Union Station and the freeway, just east of Alameda, right about where the Gold Line Eastside Extension overpass (from Union Station to Alameda) is currently being built.

The Twin Towers is north of Union Station and the freeway, at Bauchet and Vignes.

My Father, who was from France took me to lunch at the original Taix in the late '50s and early '60s. As the other posts mentioned we sat at long tables and passed large bowls of soup around. As I remember everyone was speaking French. Blueskymotorcycle

Anonymous said...
This comment has been removed by a blog administrator.
5:11 PM

My father would take the family to Taix on Commercial St. every other Sunday. There wasn't one dinner course I didn't like. Soup, pasta, salad, thick french fries.....I can still taste them. It was fun sitting down with strangers eating communial style. I remember the father Marius and his 2 sons who I think looked like twins. I will never forget!

My Grandfather, Marius Boisseranc, used to speak of coming from Gap,France at 18 years old in roughly 1870, with his friend and fellow Frenchman Marius Taix. All I know for sure is he opened the Taix resteraunt on Commercial street and we used to go there to eat years later in the late 30's when I was a child and my fathers money was no good there. Seems it must have been sons of old friends never forget. My Grandfather passed away in 1937. Maurice Boisseranc

I remember going there as a young child in the early 50's. The Sunset location was fancier and used only for special locations. My Grandfather, born in Mexico, would take all 3 generations to feast on that special Green Pea soup and the rest. It seemed spooky to sit up in the 2nd story and only see dark out the windows.
It was an exciting night in Boyle Heights when Popi said, "We're going to Taix!"

I remember going there in the 50's as a young girl with my parents and aunt and uncle....it was a fun Sunday event with long communal tables and I remember we would be served a large basket of fresh fruit, apples or something at the end of the meal. We lived near echo park so when the original closed we would go to Sunset for special occasions since it was much pricier and fancier. Thanks for wonderfulemoried