Silver Lake Tamales and another blogger takes on Farmer's Market

A Silver Lake reader let us know about his neighbor, Chela, who he says makes fabulous tamales. I haven't tried them yet but I thought I'd pass the info along in case anyone is having holiday parties con tamales. Varieties are: BANANA-LEAF CHICKEN TAMALES -- white meat in a red sauce of tomatoes, garlic, cumin and smoky guajillo peppers;
CORNHUSK CHICKEN TAMAL -- Traditional cornhusk tamales made with white meat in a
savory green sauce of tomatillos, bell peppers, and cilantro; and
GOURMET VEGETARIAN --
Cornhusk wrapped tamales made with mozzarella cheese, tomatoes, onions and mild poblano peppers. Prices are $15.00 a dozen or $110.00 for one hundred -- that's 12 free! Email me if you'd like her number.

Faithful Chowhound poster SKU is undertaking a new survey of all the stands at Farmer's Market on his blog SKU's Recent Eats, which longtime readers may remember I tried back in ought six or so. So far he's covered about the same ones I did (reviews are at the bottom of my review sidebar), but he plans to keep going longer than I managed and try them all, so check back and see if he makes it. Judging from his links, he's also quite the whiskey connoisseur. 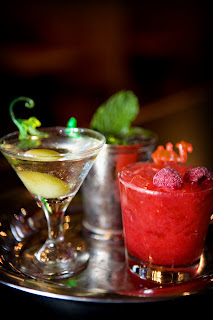 And in restaurant news...Quick, which L.A. restaurant would you describe as "comfort kitsch"? That's apparently how Luna Park sees itself...anyway, the La Brea Blvd. restaurant is doing a flight of cocktails called the Luna Park mini bar, including a mini mint julep, a Bitty Raspberry Margarita and a Tini Ice Breaker.

Plus, the Napa Valley Grille in Westwood recently purchased an entire pig from Iowa's famous La Quercia. He's doing a four-course dinner with tenderloins, housemade sausage and porchetta as well as incorporating it into other dishes.

I had the mini bar a few weeks back. It's a FUN little thing to get brought to your table and the drinks are really tasty. It takes a while, though, since they have to make three drinks at once.
I believe it was only $14, a pretty good deal.

Hi! Can I have the number of the woman who makes tamales?