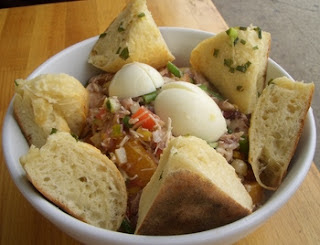 With the original Third Street Doughboys finally re-opened after some remodeling, I finally got around to trying the newer Hollywood outlet. The first thing I noticed is that the lunch crowd in Hollywood is a lot different than the staid workers on Wilshire or even the actress/slackers on Third. Girls in hotpants and towering red platforms! Guys with mohawks and expensively ripped "punk" pants! Mare Winningham! LA Weekly staffers! Russian models! I used to like Doughboys quite a bit, but recent reports haven't been too good, so I wanted to see if there was still a reason to go.
First the Pros:
The menu is maybe even bigger than the Third St. branch, breakfast is served all day, and unlike a lot of places in town, it's easy to find something that sounds good.
When the food arrives, it comes in enormous portions with no surprise, lots of extra bread, even on the salads. My pan bagnat (tuna sandwich) didn't come on round bread as promised, but it was a nice change from mayonaisey tuna salad, with plenty of capers and olives. Amy was happy with her Doughboys salad (pictured above) which seemed to have nearly everything in it. And there was enough to take home for dinner.
I was happy to see items like whole grain pancakes and malted cornmeal cakes on the breakfast menu which are nearly impossible to find elsewhere.
And prices are pretty reasonable, especially as compared to the rather precious Ammo across the street.
Now the Cons:
If you go to the Hollywood location, you simply must wait for a table inside. Highland Ave. is as deafening as Manhattan. And don't be fooled by the seemingly quieter side street tables; they face a semi truck customizing operation or motorcyle noise testing ground or something.
The service, at least outside, is pretty slow and most of the parking meters in the area are one hour, so you're going to have a hard time getting in and out in a timely way.
And there's the griminess factor: this place is nearly brand new, so why do the menus and the tables seem as sticky as the old place? Maybe it's time to rethink some of the surfaces.
If you're looking to eat very light or low carb, it's probably going to be hard to find something here, as the emphasis is on comfort food, bread, and the wonderful red velvet cake.
Verdict: I would definitely return, especially for breakfast -- but sit inside this time.
at 9:22 AM

I had breakfast there last week, and i agree with your assessment about the "griminess" factor.

I was also distressed to see graffiti sprayed on some of the windows facing Highland.

I mean, it's your restaurant and you leave graffiti sprayed on your windows?

Wish it was better than it is. The location needs more casual restaurants.

And you saw Mare, really?!

I've been here a few times, and every Doughboys experience is amazing...comfort food with an LA flair!

A friend and I recently tried the new location after years of fighting the crowds at the old location. We were really surprised at how bad the service was. So were the people at the two tables next to us!
I also was given different bread than the menu listed-- and I always get that salad partly because the bread is so good, so I was disappointed.
The worst thing, though was that we went in the late afternoon and the sun was blasting through the windows. It was unbelievably hot in there and tough to enjoy a late lunch when the sun is hitting you directly in the face. They need to invest in some shades!

I couldn't agree more. Doughboys has great food but the service is AWFUL! Why does it take 15 minutes to bring me my drink? Also, have you heard of cleaning? There are always bugs flying around and stickiness abounds. Maybe they'll learn something from the 3rd street location and grab a broom before the Department of Health closes them down too!

I love to sit outside and watch the traffic on Highland!

Anything that gives life in LA that big-city-feel is good in my book!

Plus I saw Abby and Amanda from the Ditty Bops bike by one Sunday morning.

The tomato soup is toooo sweet. They were out of some of the bread that come with the sandwiches.
Slooooooowest service around.
Dirty, STICKY, Fly-ful.
Ick.
Goddamit, I used to love this place.
Frank, get your shit together...
The guy behind the counter was nice.

yeah, service is waaaaay too slow. my kid goes to school in the neighborhood and there's no way you can pop in, gobble, and be on your way out again in time to make the first bell.

The graffiti pretty much ruins the ambience-free dining experience. Nothing much to look at here but trendoids spending Daddy's dimes.

I've seen rats running around outside the restaurant, and one of the tenants in the building said they leave some of their food items out in a alley behind the restaurant. Doesn't sound very appealing anymore. :(