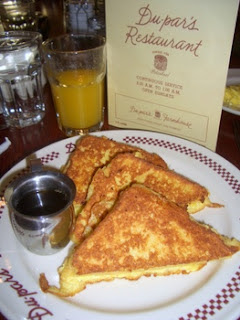 After two years of remodeling, Du-par's Restaurant at the Farmer's Market had its grand re-opening this morning. They've already been open a week or so, but today councilman Tom LaBonge showed up with some news cameras and his famous loaves of pumpkin bread to properly break the place in. In the interest of science, I had to try the French toast, the pancakes and the bacon. I liked the crispy old-fashioned diner style French toast and the medium-thick bacon (I don't really like the super thick variety). My pancake was a little soggy, but maybe I got one of the ones Tom LaBonge took a turn at flipping. There's no more counter with stools -- instead people can gather at a large communal table, the first I've seen in a diner. Otherwise, it barely looks like it's been changed at all, which is how it should be. It's a little disconcerting to see things like oatmeal brulee and sorbet on the menu, but although executive chef Jennifer Naylor is an alum of Granita, the menu sticks mostly to basic coffee shop fare, which is what it should do. 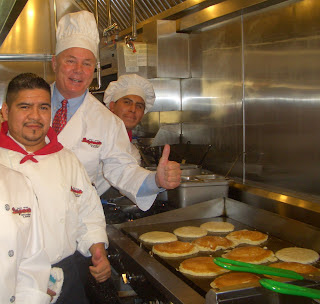 The Naylor family seems to realize that you don't mess with tradition, and the late-night crowd is definitely going to welcome another 24/7 option. Later in the year, Du-par's is going to start making its own ice cream, which should go down just right with a slice of rhubarb pie. Du-par's, it's good to have you back.
at 9:37 PM

Can I just tell you how much I LOVE Tom LaBonge !
The man is everywhere.

Was the french toast fluffy or dense? Did it taste like the griddle or like eggs (and cinnamon?)?

I want fans and followers of Du-pars to know that much has changed since the Naylor company took over... And not for the better... The original Du-pars had one-of-a-kind French Toast. It was awesome! Now, the French toast recipe is totally different - reminds me of Denny's. The pancake syrup (which used to be specially manufactured by Knotts Berry Farm has also changed...Downgraded. As for the famous pumpkin pie -- though the filling seems to be the same -- the crust is certainly not. The new recipes for old stand-by items are being made with cheaper ingredients and a whirlwind of bright and fluffy PR. Their staff will tell you otherwise... Sure. Right. That's what they've been told. But customers, you can trust your tastebuds. I know of at least 5 former die-hard, customers --loyal for 30 years -- who will NEVER set foot in a Du-pars again. They are all in agreement. The food is different. What used to make this coffee shop's food truly original is now gone. The bottom line: These days it's all about maximizing profits and certainly NOT about quality. So much for tradition! Du-Pars may you rest in peace...

Du-par's is popping up all over; Oxnard, Granada Hills.....but I have yet to get truly good service at any of them!