A trip through L.A. restaurant history 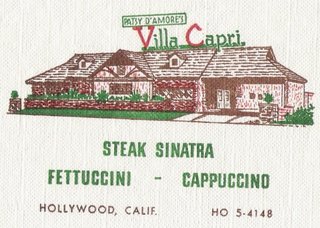 The first meeting of the Southern California Restaurant Historical Society gathered quite a collection of L.A. history buffs, menu geeks and ephemeral folk. Cathy Seipp and daughter Maia, Citybeat restauraunt critic Richard Foss, Tiki bar expert Jeff Berry, photo archivist Marc Wanamaker and author/archivist Jim Heimann were among those gathered at the Hollywood Entertainment Museum. Filomena D'Amore, daughter of Hollywood restaurateur Patsy D'Amore, talked about her dad's long restaurant history in L.A. Here's a few highlights:
--Patsy was the first to bring pizza to L.A. in 1938 at the Casa d'Amore restaurant. There was also a Catalina outpost of the restaurant, and when it closed down, he brought the pizza oven brick by brick to Farmer's Market, where he opened D'Amore's Pizza in 1948. It's still there, and still a fine place for an old-fashioned slice.
--When he opened the famous Villa Capri restaurant in Hollywood in 1957, a film of the opening night said the restaurant was "built on a foundation of mozzarella, and dedicated to the proposition that spaghetti is fattening, but who cares?"
--The restaurant was a favorite hangout of the Rat Pack and of James Dean, who had a table in the kitchen and liked to practice his Italian with the staff.
--The Villa Capri building, on Yucca, was torn down last August.
Former Villa Capri maitre d' Ciro Marino also spoke about his fellow waiters who went on to open Dan Tana, La Scala and La Dolce Vita. Marino, of course, owns Marino and his son owns Il Grano.
What an interesting bit of history! Check back with founders including L.A. Time Machines' Jonathan Foerstel for news of the next meeting.
at 5:11 PM

I'm sorry I dashed off without saying farewell--I was so glad to actually meet you, since I like your blog so much. If you ever go to a Culinary Historians event, let me know.
This was fun.


Rub filet with a extra virgin olive oil, salt and pepper. Place on grill and cook to desired temperature. Place small sauce pan over medium heat and begin to sauté the garlic and shallot. Once translucent, add the heavy cream and begin to reduce to a sauce consistency. Stir in the Dijon and season with salt and pepper. Gently fold in the crab, being sure to warm but not break the pieces.

Or maybe this is it:
Steak Sinatra - Onions, bell peppers, mushrooms simmered in a red wine sauce

Or this:
STEAK SINATRA. A thick juicy New York steak char-broiled to. your taste. Topped with a robust mushroom,. shallot, and marsala wine sauce.

Steak Sinatra Pan seared center~cut rib-eye steak medallions served in a burgundy wine and butter sauce with mushrooms, onions, peppers, tomatoes, and artichokes with a side of fettuccine

So, Frank liked a little variety. You got a problem with that?

is there a chapter of the southern california restaurant historical society in washington, dc? may i start one?

A historical restaurant society, how interesting.

One of my treasures is a paperback copy of The Brown Derby Cookbook by Leonard Louis Levinson, published in 1962. Everything I've ever made from that book has been decadent and wonderful.

I never knew the Derby, but every time I drive by and see that funny-looking half dome next to the Gaylord, I wish I had. I guess it matters less now that the Ambassador is gone too.

At least I have the cookbook! (Provenance? Yard sale, 50 cents.)