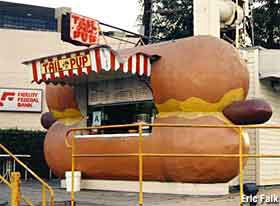 I know a few people who might be upset about the iconic Tail 'O the Pup closing in a month or so unless they find another spot to move to...

We heard that Sterling Steakhouse wasn't answering its phone last week, but a commentor says they're still open, so we'll see where that leads...

Last week was the Hindu holiday of Diwali, which is celebrated by consuming large quantities of one of my favorite sweets, burfi. The New York Times had a great article Festival of Lights, Parade of Sweets explaining the tradition. Thanks to Shali, we celebrated with some boxed burfi at the office.

Interesting article in the L.A. Times food section on The real cost of a free meal, about Esquire critic John Mariani. It sounds like he definitely crossed the line, but in fact it can be pretty hard to say exactly where the line is. Even the most reputable publications let their feature writers and editors attend familiarization dinners, which often result in news articles about new places. This seems reasonable, because it's their job to find out about new places. The top critics usually don't attend these dinners and always pay for their own dinners when doing a complete review. But there's plenty of grey areas that seem to be unavoidable in the business. I think the best advice for the reader would be to use round-up articles such as the ones in Esquire as a general source of info on restaurants, and use the reviews in reputable daily papers for a more critical look at a restaurant.
at 1:17 PM

I just passed by the pup yesterday and thought fondly of grabbing dogs with my grandfather...as many a westside kid did. A new place should be found for it or the new owner should be compelled to make room for them. It would be a shame to lose the pup.

Meanwhile, I do drive by Jays every day. It's closed but not gone. Maybe it will still reopen. The shopping center going up around is an abomination...and where the hell will people park when it opens. It's very strange indeed.

Anyway, save the pup!

Well, I don't eat hot dogs any more. But it would be such a shame to lose the Pup. I hope they keep the building/hot dog and move it somewhere else. I hate to see landmarks disappear. We need to preserve our history - even if it does look like a giant hot dog.

sterling steakhouse is open for it's regular hours. Tuesday through Saturday opening at 6.