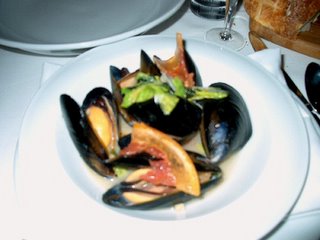 Litty and Melkon from Modern Spirits Vodka invited me to a vodka pairing dinner at Table 8 Tuesday. Like pretty much everyone else, I'm normally more of a wine pairing person, but I wanted to see how this concept worked -- and try the restaurant, of course. It turned out to work pretty well, and I never missed having a glass of cabernet with my steak.
We started with a green bean salad with duck proscuitto and carmelized tomato, which paired nicely with the celery peppercorn vodka. Melkon told us about the intriguing "reverse bloody Mary" made at Voda with the celery peppercorn vodka and seasoned tomato juice ice cubes.

Next up was steamed mussels with preserved grapefruit, paired with grapefruit honey vodka. I enjoyed the plump, meaty mussels. Two quibbles here, though -- it's pretty hard to improve on traditional ingredients such as wine, butter and garlic when preparing mussels, and I'm not sure grapefruit was up to the task; and the grapefruit honey vodka was very pleasant, but with the grapefruit in the mussels, it might have been a bit too much citrus.
The main course was grilled kobe style beef with roasted mushrooms and some sort of lovely braised greens -- I think they might have been romaine. The accompanying black truffle vodka was earthy and flavorful on its own, but the subtle truffle taste was pretty much overpowered by the assertive beef with its deeply-flavored mushroom gravy.

A plate of assorted cheese was served with pear lavender vodka. I never would have thought of serving cheese with vodka, but why not? These are sipping vodkas, and although they make excellent cocktails, the flavor of the infusions comes through best straight up. I loved the strong lavender flavor -- this one would also be good with a mild goat cheese.

For dessert, the maple ginger creme brulee was a light yet creamy taste with bits of candied ginger hidden in the smooth creme. The maple flavor wasn't very pronounced, but it didn't matter. I love the candied ginger vodka, which makes a killer cocktail with sweetened fresh lime juice and club soda. It might be interesting to contrast the flavors of the food courses, though, rather than matching them -- maybe the astringent grapefruit vodka would cut the richness of the creme brulee, for example.
In other cocktail tips, Litty told us about one of her newest cocktail creations -- tea-flavored vodka is combined with fresh-squeezed orange juice and a dash of sweet balsamic vinegar. Sounds intriguing...
The verdict: Table 8 had good service and a stylish look. While the dishes weren't extremely adventurous, everything was well-prepared and the vodka pairing concept definitely made for interesting conversation.
at 9:27 AM

Just curious--what kind of glasses did they serve the vodka in? And how much with each course--a whole shot-ful? Straight up or on the rocks?

The glasses were elongonated shot glasses, like a liqueur glass. It was a whole shot with each course, straight up, since it's meant to be slowly sipped. I didn't drink all five shots though, I sipped around half of each!

Is the difference between a flavored vodka and a liqueur just the addition of sugar?

Hi,
You have a neat blog here. I have a site on Chocolate Shot Glasses that you may be interested in linking to.