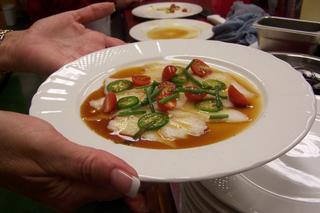 Last night I took a class at Chefs Inc. on Pico from Rodelio Aglibot, the chef at Yi Cuisine. I'm not exactly sure why he picked the theme "Sea Bass from Start to Finish," but I've liked the small bit of his food I've sampled, and it didn't threaten to break the diet. Chefs Inc. is a nice little facility at the corner of Veteran that offers all types of cooking classes, including several Monday night classes with well-known local restaurant chefs. Rodelio is a friendly, laid back guy with an eclectic approach which incorporates his native Hawaii and his parents' native Phillipines into touches from other Asian countries.
We started with making sea bass, corn and shitake salad, which involved sauteed corn, scallions and shitakes mixed with flaked cooked seabass. We then tossed this mixture with a soy-based ginger garlic viniagrette and served it on a bed of lettuce. It was a wonderful, light dish, but I might cut down the full half cup of sugar in the recipe when I make it. I find that some of L.A.'s pan-Asian style chefs tend to go very heavy on the sugar in their main dishes.
Then we mixed up a tandoori rub for roasted baked sea bass using an unusual mixture of ground carrots, miso, cilantro and lemongrass. This was probably the hit of the night, and Rod says it's one of the most-ordered dishes at Yi. I thought it was the only dish that really brought out the flavor and texture of the seabass to its full advantage.
We moved on to carpaccio with ponzu, which had a tasty sauce and a nice presentation, but seemed better suited to an albacore-type fish. This would be easy and impressive to serve to guests if you could get some sushi-quality fish and slice it thinly.
We finished with seabass fritters. Chef Rod improvised and threw in the leftover corn kernels, which was a nice touch as I love corn fritters. These were served with a lime sour cream sauce.
It was a fun night of cooking and learning tips from a pro, and I'll definitely try a few of these dishes at home, perhaps with a less-endangered type of fish.
Chef Rod reported that he's consulting on a wine bar to open later this year on Spring St. downtown which will have a very minimal tapas menu, and he also has plans to open a new restaurant in Northern California.
at 9:47 AM

Just thought i would say hi from Japan. Doing some blog surfing and found your site. Im looking for some cool styles of puppy food for my own blog. Theres some really amazing blogs about. if you have time check out my site you will find information on puppy food. Well when i get my blog running hope you come and check it out.

Hey, you have a great blog here! I'm definitely going to bookmark you!

I have a Health blog. It pretty much covers Dieting Health Fitness Exercise related stuff.

Come and check it out if you get time

I've been finding almost all of my sushi hana here

Come Visit Santa at his blog and tell him what you want for Christmas,

Serve Chef Style delicious Indian Cuisine to your family and friends.
Everyone will be shocked at your success in this culinary art of cooking.
Learn the secrets of Professional cooking from these 5 Star Chefs.
curry
For all Indian food lovers.
Link to this site: curry
http://www.eating-healthily.com/

Hi thanks for your blog, I liked it! I also have a blog/site about Body Building that covers Body Building related stuff. Please feel free to visit.

Hi, I was out blogging and found your site. It certainly got my attention and interest. I was looking for Flea Treatment information and even though this isn't a perfect match I enjoyed your site. Thanks for the read!