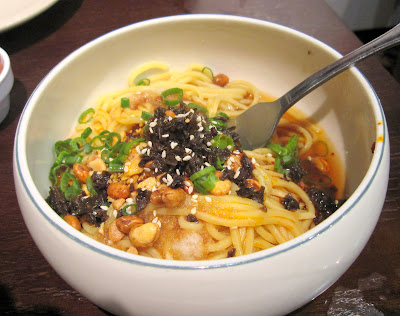 Will it displease the gods of Chinese food if we go to a Sichuan hot pot restaurant and do not order a hot pot? Perhaps, especially since the requisite framed Jonathan Gold review on the wall of New Chong Qing is titled "New Hot Pot Spot." But after an 80 degree winter day, we're not in the mood for hot pot, so tough. What we are in the mood for is dan dan noodles, and New Chong Qing is said to have some of the best in the area. New Chong Qing is in a modern mini-mall, and with a brief laminated menu and wall decorations of empty Ikea frames and neon post-it note doodles, it has a slick, yet improvisational quality. The menu translations are some of the most amusing around, from pig waist to a drink called something like Manifold Destiny.
Dan dan noodles are just $3.99 a bowl, so order two -- it's not a large portion, and though they're rich and greasy, you'll likely want more of the nutty, slightly numbing, slick herbal mixture. 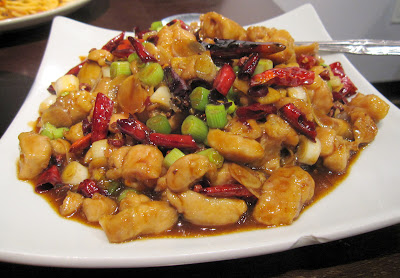 If the gods are angered because we ordered Kung pao chicken (above), then so be it: This is a tangy dish of chicken, garlic and chiles with no peanuts or sugary, goopy sauce to be found. Ma-po tofu over rice has a similar flavor profile to dan dan noodles, so maybe we should have tried green beans or other vegetables instead. But since that profile is complex, spicy and flecked with alluring Sichuan peppercorns, there's no cause for complaint. New Chong Qing doesn't have the hottest food around or the largest menu, but for a quick bowl of satisfying noodles at lunch or dinner, it's just the spot. There's no beer, but Matt was happy with a blueberry slushie. We'll take more people and try to balance the dishes better next time -- oh yeah, and maybe even a hot pot.
New Chong Qing
120 N. San Gabriel Blvd.
San Gabriel
626-309-0836

YES!! We're sooo the same page. BEYOND the hotpot. Love it!

Despite the heavy hitting Shufeng Garden and Hunan's Kitchen both opening late this winter, most of us still agree New Chong Qing's various noodles are top notch.

No peanuts? That's one of the best parts about Kung Pao chicken.

I didn't have a great experience at New Chong Qing. The food was pretty good, but doesn't compare to Chung King or Shufeng Garden, The hot pot had good flavor, but the spicy fried chicken wasn't meaty enough, and the noodles with potherb mustard sauce featured mushy noodles. The "secret service" fried rice was surprisingly good.

Mm, cheap dan dan noodles...thanks for the tip. I've never been here before but am definitely going to make a stop now.

Thanks for the tip, Pat. Love me some noodles pretty much every single day!

Yeah, the dan dan mien and the kung pao chicken will put (and hopefully keep) this place on the map.

The Szechuan Cold Noodle is, in my opinion, the best of all the Sichuan places. Very good noodles and a nice slow burn. And a good portion for only $3.99. Unfortunately, it's all I've had there, I truly need to return and explore more of the menu.

I count 7 red chilis in this dish. True kung pao. Dan dan noodles are the best they melt in my mouth which is big enough to consume much of them. This place has potential.