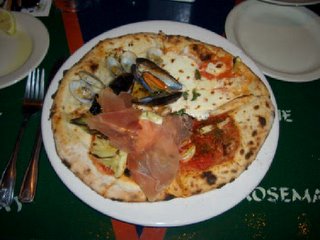 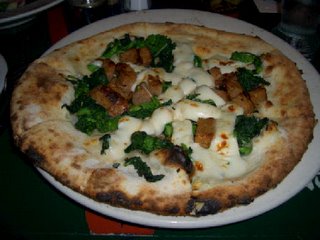 I'm doing some pizza research at the moment, and having recently had pizza from La Buca and Damiano's, we decided to go further afield. I heard that Antica Pizzeria in Marina del Rey had the only pizza maker in L.A. certified by the Vera Pizza Napoletana association -- in fact the owner is apparently president of the North American branch. Well, I didn't find out whether he was in the kitchen Saturday night, but I hope he would be ashamed at the pizzas they sent out to us. Matt ordered a Quattro Stagioni, with artichoke hearts, proscuitto, mussels and clams. When they put it down, the burnt mussel shells gave off a powerful briny odor, which immediately put him off. They were so burnt that pieces had already broken off in the cheese, making it impossible to eat. I've never seen a seafood pizza served with the shells still on like in a pasta dish, and this seemed like a new and bad idea. The proscuitto seemed haphazardly piled on the pizza, and under the cheese lurked some chunks of pre-cooked mushrooms. It didn't seem like this pizza had been put together by anyone who had ever eaten a pizza -- everything was just thrown on, and nothing was integrated into the cheese, which didn't seem cooked enough.
Many of the pizzas are inexplicably served without sauce, including the one I ordered, with broccoli rabe and sausage. It also seems crystal clear that sausage on a pizza must be crumbled, not in chunks, but this one featured haphazardly-strewn chunks of sausage and some nice clumps of broccoli rabe. The crust, from a wood-burning oven, had a good flavor. My pizza could have been good with sauce, crumbled sausage, and a little more time in the oven, but Matt's was a disaster from start to finish. Service was also a minor disaster, with the pizzas taking forever to come out and a friendly Italian waiter repeatedly visiting the tables on either side of ours to chat and make sure everything was ok, while our waitress hid far away in another part of the restaurant. At least she comped the shell-filled pizza. Strangely for a place supposedly known for their pizza, most of the people around us had pasta and salads.
Verdict: Stay away from Antica Pizzeria. If I'm ever in that neighborhood again, it's back to Abbot's Pizza.
Antica Pizzeria
13455 Maxella Ave.
Marina del Rey
(310) 577-8182
at 9:08 PM

Ugh, that's so depressing! Again, sad proof positive that L.A. is just not a pizza town. Casa Bianca isn't enough, nor is it all that. Better to make your own at home, but alas, standard ovens aren't hot enough to really get the job done.

Yet another reason why I'm waiting with bated breath for the Silverton/Batali joint to open...

Wow. Sad looking "arrangement." The charry spots on the crust look promising, but I agree with your negative assement otherwise. Most LA pizzerias don't have the chutzpah to run their ovens hot enough to properly form a crust like that.

Sounds awful. I agree with Jessica that LA is not a pizza town. Having been born and raised in Bensonhurst Brooklyn, I have spent the last 5 or so years searching LA for that perfect slice (and for a moment I found it at Vito’s Pizza). Been let down at Nicky D’s, Hard Times, Palermo etc. Village on Larchmont has come close on a couple of occasions, and so has Damiano. Never been to Casa Bianca, though anything I have read or heard does not sound too encouraging.
My search for the NY style Slice usually keeps me away from places like Antica Pizzeria where they serve Neapolitan individual pies, but bad pizza is disappointing no matter what style.
I did want to say that I disagree with your assessment of broccoli rabe and sausage pizza. First of all, not every pizza should have sauce. Usually sausage and broccoli rabe (served as a hero sandwich, or an entrée) does not have tomato sauce. The dish is meant to accentuate the bitterness of the broccoli rabe and the spice of the Italian sausage. The sweetness of tomato sauce would only mask these flavors. Secondly, sausage on pizza should not necessarily be crumbled. The NY Pizza I grew up with also used sausage slices, not the crumbled stuff. The only time I encountered crumbled sausage were on those occasions that my family would be in the suburbs and for some odd reason we ended up at Pizza Hut.

I like the pizza at Casa Bianca if I'm only ordering a small. The crust balance gets thrown out when the pie gets any bigger. The crust there is almost like a cracker, so it's nothing like a good-ol' East Coast pie.

The place I love, love, love for pizza is Zelo's, which all the way in Arcadia on Foothill in a sort of strip-mall building next to a nail salon. They serve hearty, corn-meal crust pizzas that I crave constantly. Their staff is very, very nice. It's just an order-at-the-counter place, but it's worth the drive and sitting in plastic chairs. Oh, and the beet salad is amazing. And they make their own sausage! Man, I want to go there for dinner tonight... mmm.

As a fan of Stromboli's pizza and Pintailes in NY, I've also been terribly disappointed by pizza in LA. However, friends alerted me to D'Amore's Pizza Connection which imports their water from Boston, thin pizza most represents NY pizza. They have several locations (unfortunately none real close to me! So far, that's the best I've had.

I just ate at Antica Pizzeria a few weeks ago and completely agree that it wasn't up to par. It wasn't horrible, but definitely nothing like I've had in Italy.

I ate a fantastic thin-crust pizza at Michelangelo in Silverlake on Friday night though. My friend Nicole and I split the large "Michelangelo" pizza which is prosciutto, mozzarella and tomato sauce. Highly recommended. If they have the special burrata appetizer, it's always worth ordering that too.

I think the poster should give Antica another chance after having a bit more experience with authentic Italian cuisine. It's frustrating to read this blog entry and some of the comments - culinary ignorance.

It's long been established that Neapolitan pizza is the original pizza. And Antica Pizzeria is the only vendor on the west side where you can taste the 'original' version without changing flights - twice.

Antica Pizzeria prepares pizza in the 'exact' steps dictated by the Neapolitan tradition, using a wood burning oven. The ingredients are ALL imported or the freshest possible. Including the flower used to create the crust.

The owner is usually contiuously present and monitors closely the product which comes out of the kitchen. I have seen pizzaioli taking lessons from him.

In addition to pizza, a diner can find a host of other authentic Neapolitan dishes - incredibly well prepared.

When pizza afficionados visit Antica - it is quite clear that one is feasting on the 'inspiration' that has perpetuated the pizza tradition around the world. The fact that the poster likes the Americanized product better is a matter of personal taste.

Seafood is core to the Neapolitan palette. Putting shellfish on a pizza (shell and all) indicates that it is fresh, and properly prepared. Moreover, doing so preserves the juices and aromas that are only possible if the shell is maintained. And really, do we have difficulty understanding what must be done with the shells?

Toppings are 'condiments' in Italian pizza - rarely if ever are they 'integrated' with the cheese. With the abundance of cheap Wisconsin faux cows milk semisoft mozzarella it became possible to overwhelm pizzas with cheese. Over time this 'overdoing it' has resulted in the tragedy that are the pizza's of Chicago - less like pizza and more like a casserole.

Go to Naples, taste the pizza, then come back to Antica and review it again.

I completely agree that the pizza is only ok. What really turned me off was that they offered ice cold bread when we sat down at our table.

the place on melrose -- albano's -- is pretty good...also the place in Beverly Hills...

I agree, I live and work in the area and have been talked into going back to Antica Pizzeria twice after my first, not necessarily bad food, but horrible service. I have read other comments about how good the pizza is... (no comment)

The next time I went was for a work lunch, and since it was not busy, I figured the service would be decent. For some reason the waiter could not handle two tables at once. What should have been an hour lunch became two hours, for mediocre food and more importantly, a bad time and bad mood had by all. There is nothing worse then going to eat with friends and coming out cynical and feeling ripped off. I agree with you, if in Venice area, take a stop at Abbots. Its decent.. These days I cant stop craving Mulberry St Pizza in BH.

If one is to compare pizzerias, I would strongly suggest going for Pizza Margarita (simple cheese pizza). Then one can compare apples to apples. Getting a seafood pizza, the first time you try a place, will undoubtedly present you with the dilemma you are in...

Knowing how to order in a restaurant is as important as to which restaurant to pick.