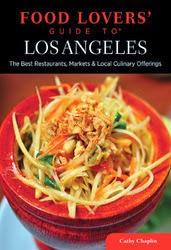 There aren't very many up to date guidebooks to L.A. restaurants. The Zagat Guide covers but a small swath of the area's bounty, concentrating on the most popular as decided by readers, while I contributed to the locally-published Eat: Los Angeles, which had a good run until 2011 as a yearly-updated, compact guide that covered hundreds of standbys and lesser-known spots. And that's pretty much it -- everything else is either way older or woefully incomplete.
So Cathy Chaplin's Food Lover's Guide to Los Angeles, from Globe Pequot's Food Lovers series, is a welcome snapshot of the area's best fine dining, bakeries, ethnic spots and specialty markets. It covers the trendy places, of course, from Picca to Trois Mec. But Chaplin, a respected L.A. food blogger (GastronomyBlog), crisscrossed just about every corner of the L.A. area to research this guide, and she includes finds in places like Rowland Heights and Huntington Park that may be on local foodbloggers' radar but will be new to many readers.
Chaplin (née Danh) has lived in Vietnam and traveled widely, and the book is particularly strong in Vietnamese, Chinese and Korean entries and in its coverage of the San Gabriel Valley. Mexican entries are also solid (no doubt due to some consultation with Bill Esparza), and if you'd like to try out food from Nicaragua, Cambodia or Jamaica, you'll find those too. As a bonus, a few recipes at the end include ones for A-Frame's Sriracha ganache, Huckleberry Cafe's salted caramel bars and Kogi's kimchi quesadilla.
With Chaplin as a guide, there's no excuse for not venturing to Bell, Carson or Inglewood to taste some of L.A.'s staggering diversity of flavors.
at 5:19 PM

Wow. This sounds wonderful. Can't wait to dive in. As an avid fan of the many delights Rowland Heights has to offer, very excited to see it get more attention! This looks like a wonderful guide. Thanks for the rec.
-the team at cinefoodie.com