Some Friday links we're reading about with varying degrees of appetite, lust or horror:

Sustenance for Arts District dwellers: Urban Radish is a "farm fresh community market to shop for seasonal fresh produce, high quality meats and seafood, dairy and other daily necessities." Downtown dwellers are likely chuffed to have this market on Mateo St. near Church and State coming in early 2013, complete with a parking lot and electric car charging stations. Owners Keri Aivazis and Carolyn Paxton also promise seasonal salads and artisanal meats and cheeses with locally baked breads in its deli and charcuterie. Between Urban Radish and recently-opened bakery Bread Lounge, this area is finally gaining more daytime allure.


Which Bourdain is a low-carb fanatic? It's not Anthony:

I hadn't paid much attention to Anthony Bourdain's wife Ottavia up to now, other than the occasional thought that she must be fairly patient to hang out with the kid while he drunkenly careens around the world followed by a camera. But apparently she's some kind of super-human, Dukan diet-following, Thai kickboxing expert who lives on canned meats and several pounds of Brussels sprouts at a time. Huh? Not only is she missing one of the prime advantages of living with him -- eating omnivorously and for enjoyment -- I kind of wonder how her kidneys, etc. are doing after all that steak, bacon, heavy cream and coffee, and what kind of food messages their daughter is picking up from her parents, both food-obsessed in very opposite ways. (via Grubstreet) 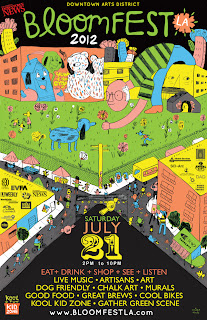 Sam Sifton tries out Roy Choi's version of carne asada, with mirin and bean paste. It's probably awesome, but I'd rather have Choi's food cooked for me than make it myself, so I'm checking out the new all-you-can-eat fried chicken picnic with sweet-potato salad at A-Frame on Saturday with a bunch of other food bloggers. Yeah, screw the Dukan diet. Some guy in the comments thinks carne asada isn't really a thing, but apparently has never been to Mexico. Duh. (via NYTimes)

Also, there's an L.A. punk band with the adorable name Carnage Asada playing at the free Bloomfest next Saturday (July 21) in the Arts District along with Mike Watt, the Gears and Saccharine Trust. There's also food trucks and a beer garden at Angel City Brewing, so it could be a good time. Let's hope no one decides to break out the chalk.

Damien said...
This comment has been removed by the author.
3:22 AM