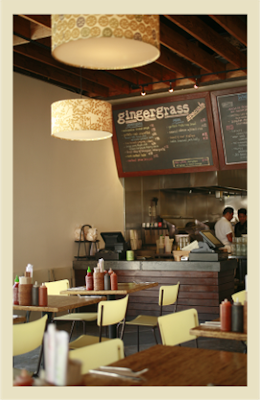 
Local craft brewer Eagle Rock Brewery and Silver Lake’s Gingergrass introduce the unique Vietnamese concept of Bia Hoi or “fresh beer” at the eatery’s new bakery/bar which opens Tuesday, November 1.
By day, the new space next to the restaurant will dish out baked treats, sandwiches, fresh salads and other Vietnamese deli items. At night, the bakery will transform into the lounge and waiting area for the busy Vietnamese bistro.
Along with regular beers and wine, the cozy space will feature the Bia Hoi “fresh beer” created by the two neighboring businesses.  Bia Hoi is served at the many corner cafés of Vietnam ’s bustling thoroughfares. Bia Hoi is very light and has a lower alcohol content.
“When I came back from Vietnam , I knew exactly what I wanted to do with the lounge we were building out”, says Gingergrass’ Manager, Robert Lee. “Bia Hoi is about hanging out at the café and having a snack and fresh, light beer.  I knew that we would have to have the right beer to appeal to our neighborhood.
This is where Eagle Rock brewery’s Jeremy Raub stepped in. “When John Himelstein, (owner of Gingergrass and Square One Dining) and Robert approached me, I was excited by the challenge.  Craft beers aren’t typically value driven like traditional Bia Hoi is, but it’s the idea of the culture and community behind the Bia Hoi Cafés that resonates with what we’re trying to do in LA.  And since Gingergrass is one of my favorite restaurants in the neighborhood, I invited them over to see what we could come up with.”
"It turns out after a few enjoyable early morning tastings, we got it!" Raub explains.  “In the end, we were able to create lower gravity (or lower strength) versions of our regular production beers that are much lighter tasting but still retain their character.  We think our interpretation of Bia Hoi pays homage to the culture and community of the original Vietnamese version, but adapts it for our local culture and our local palates.”
Fresh bar snacks such as pork shoulder banh bao, a conch and green mango salad served with shrimp chips and garlic-ginger peanuts dusted with kafir-lime salt will accompany the experience starting Tuesday, November 1 at Gingergrass in Silver Lake.

Sounds good. Think I will check it out. Do the Bia Hoi have any flavor. I am imagining a beer that tastes like Hite, but a little lighter. What do you guys think of it??