Mercado: a preview of nuevo Mexican in Santa Monica 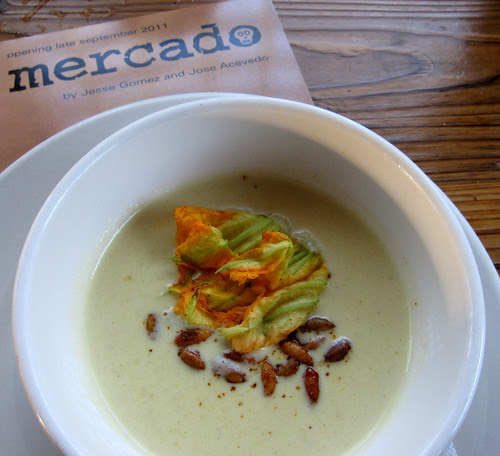 After successfully launching Yxta downtown last year, Jesse Angel Gomez announced plans to take over the former Serenata di Garibaldi spot on 4th St. in Santa Monica with Mercado. Gomez and Mercado chef Jose Acevedo hosted a Mercado preview at Yxta last week accompanied by a Partida tequila tasting, where we got a preview of some of the dishes to be expected there. Mercado is aiming for an October launch, with a rustic/industrial redesign featuring an upstairs tequila bar. 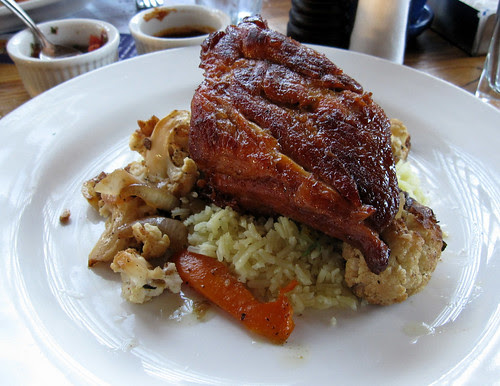 Now that's a hunk 'o pork: Carnitas were rich and tender, though they might have been even better folded into a handmade tortilla with an interesting array of salsas. The rice and cauliflower didn't pack enough flavor to stand up to the crispy puerco. Camarones al mojo de ajo with green beans and rice (shrimp in garlic sauce) also seemed a bit mild, though the shrimps were plump and meaty. My favorite dish was the squash blossom soup, with a nice jolt of heat firing up the creamy base. Acevedo certainly knows how to cook his pork, but located right across from Border Grill, Mercado is going to have to summon all the vivid flavors it can to distinguish itself from the rest of the pack.
Mercado (1416 4th St., Santa Monica, opening targeted for October)
at 11:08 PM

The carnitas look good. Hopefully the accompaniments will be on the same level once Mercado debuts. Great photo of the squash blossom soup. Very inviting.

Wow, looks great!! I would love to try this!

Ok, i have made this my next destination! :) thanks for the info

Hmmmmmmm. Don't think it's quite up to Border Grill? Will wait to hear the dirt on this place.Thanks, Pat!