If it's Monday, it must be caviar time at Petrossian 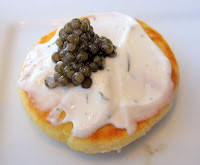 Being a food blogger can be pretty tough. Stuffing myself with eight consecutive lunches in 95 degree heat in Tijuana, eye tacos in Santa Barbara, bad, unblog-worthy meals...it's true there are challenges, but stopping by a caviar tasting dinner at Petrossian in West Hollywood is certainly not one of them.
Petrossian is now offering caviar tasting dinners on the first Monday of each month for $100 (just be glad you're not in New York, where it's $150.) I hadn't yet eaten at Petrossian, but I knew chef Ben Bailly was turning out refined plates that go far beyond blinis and toast. The bright white restaurant is chic and blissfully quiet, a kind of shrine to better show off the tiny black eggs. We started with tastes of three caviars: 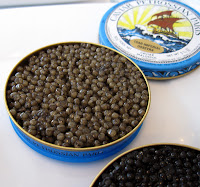 Royal Transmontanus sounds exotic, but it's from the Sacramento area. Similar to Osetra, it's mild and butter and goes for $63 for 30 grams. Next up was Tsar Imperial Siberian from Florida, the strongest of the three with a briny deepsea taste. The final tasting was the imported Tsar Imperial Osetra, with a perfectly-rounded nutty flavor and the highest pricetag at $170 for 30 grams. I found plain white toast carried the flavor even better than blinis and creme fraiche.
Petrossian recommends champagne or vodka with caviar, and in addition to its extensive champagne list, the restaurant now serves a full cocktail menu including, of course, a Caviar-tini with a caviar-stuffed olive.
The menu items are carefully thought out to show off the caviar, and the silky cauliflower panna cotta was my favorite, served in a caviar tin. 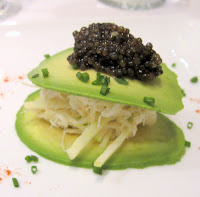 Avocado with dungeness crab, celery and green apple was a buttery, mild complement to the salty eggs. 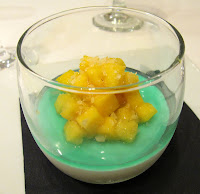 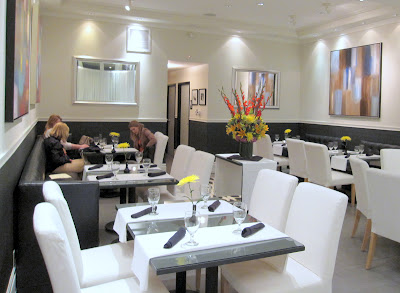 Modern art and a black and white color scheme are a perfect backdrop for an indulgent caviar tasting.
at 9:58 AM

I've been dying to get over there. Thanks for rekindling that desire. ;-)

I forgot how much i enjoyed this restaurant. I have to grab some friends and go back.

i have heard great things about this place, and that avocado dish looks fabulous.

My husband is a die hard caviar fanatic. I will have to take him there. It looks mouth-watering!