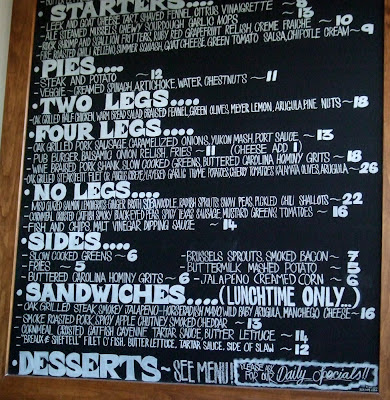 The menu is divided into Two legs, Four legs and No legs...

There's no better refuge from the tacky parade of Melrose Ave. on a Saturday afternoon than a cool leather booth at the Village Idiot. I know it gets noisy and crazy later on, but at 6:00, it's a fine place for a cool beer. It's early for dinner, but I'll never rest until I taste the fish and chips at every pub in town, and the Village Idiot's have a terrific light and crunchy crust. Skip the tartar sauce and douse the whole plate with vinegar, and dig in -- you won't be able to stop, at least until the beer runs out. 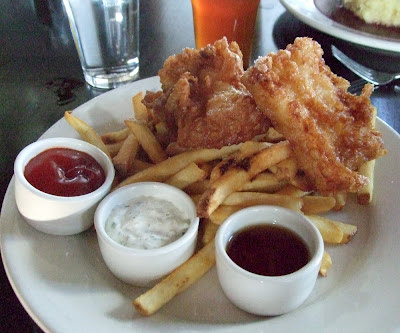 Fish and chips batter is extra-crispy but not heavy

I loved my ESB beer but in the heat of the moment, I've forgotten the brewer. Matt was happy with his Craftsman lager but his oak-grilled sausage and Yukon mash with port sauce was fairly mundane. Despite the foodie buzzwords sprinkled throughout the menu, this is basically competently-prepared pub grub that goes down well with beer. Actually, the beer menu is smaller than I expected, and I would prefer more booths and fewer tables for that real pub ambiance, but hey, if you have to hit Golden Apple comics on a Saturday, it's a fine place to recover.
at 7:47 AM

They have the BEST salads at Village Idiot - simple and straightforward, but the quality of the ingredients can't be beat. The lettuce tastes like they grow it on-site!

i pass by this place too often not to visit it. I've been wondering where to find good fish and chips in LA.

they also have great burgers.

Wow the menu is very interesting. I should go try this place sometime.

To Matthew k, try Robin Hood British Pub at 13640 Burbank Blvd. in the valley, just east of Woodman, for what many feel to be the best fish & chips.

i've tried their mussels and was pleasantly surprised. the croutons that accompany them are particularly tasty.

It is the goonzu gold which make me very happy these days, my brother says goonzu money is his favorite games gold he likes, he usually buy some goonzu online gold to start his game and most of the time he will win the buy goonzu gold back and give me some cheap goonzu gold to play the game.