How to Decide: Which L.A. Beer Week Event to Hit Up On the Eastside? 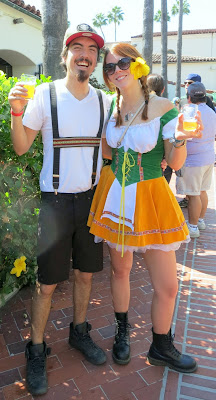 An insane amount of events are on tap, so to speak at L.A. Beer Week from Sept. 19 to 29. Here's a quick guide to help decide which ones to try, with a focus on the Atwater/Echo Park/Highland Park area. (I'll say it again, Silver Lake itself = not a great beer destination.)

If you want some really good food and rare Craftsman beers: Craftsman Beer Dinner at Maxmiliano includes a five-course menu and some rare, brewed-in-Pasadena beers, Wednesday, Sept. 25.
If you want to find out more about homebrewing: Chloe's at Golden Road hosts a Brewer's Supper, also on Wednesday, Sept. 25.
If you like beer for brunch: Eagle Rock Brewery hosts Beer for Brunch with food from Glassell Park's Poppy Kitchen Sunday, Sept. 29.
Other Eastside bars and restaurants participating in beer week include Spitz, the Oinkster, the York, Atwater Village Tavern


Selected Downtown events:
If you want to kick off Beer Week with a big bang: The opening gala, Sunday Sept. 22 from 11 am - 3 pm at Union Station takes place indoors this year with fewer tickets available for maximum beer enjoyment. Tickets are $70, but this year, there's food too!
If you want to do a Little Tokyo pub crawl: Friday, Sept. 20, Big Crawl, Little Tokyo starts at One Eyed Gypsy and move on to Far Bar, Angel City and more.
If you want to hang out with beer bloggers: L.A. Beer Bloggers talk about "Covering Craft Beer Like a Pro" at Angel City Brewing, Saturday, Sept. 21.


And that's not even mentioning Lucky Baldwin's pub crawl, the Epic Ceviche tasting, comedy improv show or many, many other events. So really, there's no excuse to miss L.A. Beer Week this year and get a taste of Southern California's craft beer exploding craft beer scene.
at 9:53 PM