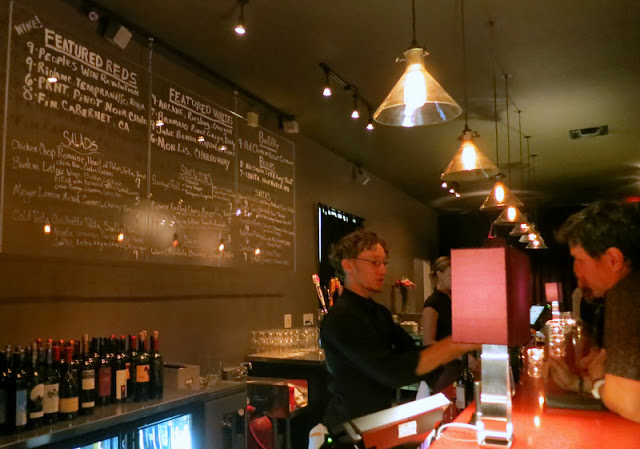 Former "CSI" production coordinator turned wine bar proprietor Nicole Daddio has soaked up a lot about the Echo Park sensibility since she opened City Sip four years ago. One of the things she learned is that Echo Park's wine bar enthusiasts are pretty much allergic to high prices, formality and fussy wine protocol in general. So she's revamped City Sip with comfy benches along the wall, sofa seating areas in front and in the rear, and no seats along the bar at all, the better for informal quaffing. The menu has also gotten a revamp with the help of Gloria Felix, formerly of Silver Lake's Reservoir, including several sandwiches, cheese and charcuterie plates, flatbreads and even banh mi lettuce wraps. Wine prices have been lowered, with a tigher focus on "value wines," according to Daddio. I tasted a Chilean pinot noir that was indeed a good value at $6, although a $9 tempranillo was a little harsh. 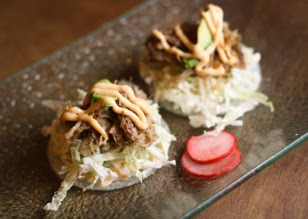 Pork "tacos" on a jicama slice were light and fun for $5, and everyone enjoyed the cheesy mushroom flatbread at $6. City Sip has responded to the changes in Echo Park in a smart way -- it's not necessarily where serious oenophiles will go to find rare wine, but it's a comfortable and approachable place for a glass of wine or a craft beer in a more intimate space than cavernous Mohawk Bend across the street. Beer choices include Uinta's Hopnotch IPA, Eagle Rock Brewery Populist and Alesmith Speedway Stout. City Sip now really lives up to its motto -- "wine for the people."
City Sip LA
2150 W. Sunset Blvd.
213-483-9463
at 11:44 AM

Wow, artisan foods can be so attractive to the mind and the stomach, but what gets me is how I'm paying 10 dollars for two tiny appetizers?

SB! The good news is that it is $5 for both tacos! Awesome and delicious!

I am a food liver, it is so attractive. Thank you for sharing.