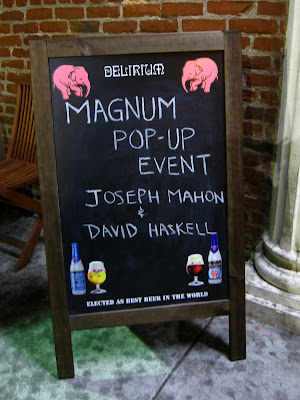 Unexpected locations are one of the fun aspects of pop-up restaurants, and the sleek, spacious Korean pub Biergarten on Western might not seem like the kind of place to find ex-Bastide chef Joseph Mahon and maverick sommelier David Haskell. But Haskell loves Korean food and Mahon has a background in Asian food as well as a history of doing underground restaurants at his house, so it kind of all makes sense.

The $56 five-course tasting menu (GourmetPigs and I split the $54 wine pairing) dipped in and out of cultures, with French wines meeting sake, Belgian beer and soju and the richness of French-inspired dishes enlivened with the likes of kimchee broth and pickled cabbage. Haskell says tonight is a full house, so it may be too late to score a spot, but the first night of this two-night gig was a relaxed dinner with pretty much every dish and pairing a total hit.

Carrot pudding was a subtle way to start. Orange granita and chopped peanuts perked it up, but this turned out to be the least memorable dish. Rosy Pinot Noir/Pinot Meunier Champagne provided a Creamsicle effect with the starter, Haskell explained.

Coconut soup with mussels, cilantro, a fried mushroom and the surprise texture of tapioca took on Thai coconut soup and won, with a sophisticated interplay of  umami-laden components. Ultra-smooth premium Wakatake Onikoroshi sake was an inspired match to the creaminess of the soup. 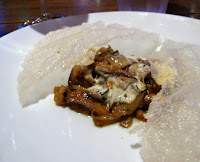 Wild mushrooms with pork cheeks in bearnaise were lucsciously creamy with a fairly acidic Domaine Jo Pithon chenin blanc with notes of banana. The mushrooms were topped with a crispy rice cracker -- nice idea, but these turn greasy and gummy if not properly fried and the cracker was only real misstep of the evening. 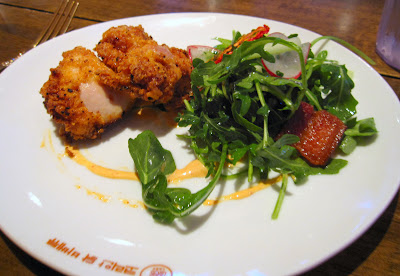 Fried chicken was nearly everyone's favorite, with a buttermilk sauce and tartly-dressed arugula perfectly balancing the crunchy crust, paired with a French syrah/grenache/mouvedre blend with hints of blueberry. 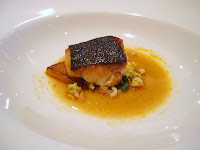 Butterfish with pickled cabbage and kimchee was a delicate nod to the neighborhood; Triple Karmeliet beer with citrus notes made a fun counterpoint to sour kimchee.

Duck leg confit in a classic preparation with nicely-crisped skin also featured welcome roughage from chard and lentils. Haskell went for a 2008 Pithon-Paille cabernet franc which was sour and astringent on its own, but totally mellowed with the fat of the duck skin. It worked for us, though some weren't sure if there was any way to save that wine.

Finally, I don't usually expect much from dessert, but Mahon's decision to deep-fry his gingerbread waffles made the dessert the best square churro ever ,accompanied by a cranberry compote, clover honey and

creme fraiche that made the palate register TART! CRISPY! CREAMY! SWEET! by turns. A fiery soju pairing was fun for those who needed more alcohol, but that wasn't me.
OK, I'll admit one reason I liked this meal was that there were so many fried dibs and dabs, plus some of my favorite ingredients like wild mushrooms. And the fact that five courses somehow grew to seven generous plates. But this was definitely the way to do a pop-up -- low on the reservation drama and high on flavors that aren't completely expected. Mahon promises a longer series of dinners to be announced soon, so keep an eye on the blogs.
at 9:00 AM

Sounds delicious!
Wish I had had the schedule availability to join you.
And, yes, from a neighborhood that is just starting to come into its own, yet with a different perspective.
Keep pourin' the good stuff David!