Gelato Bar is offering samples at low 1936 prices until its grand opening later this month. Formerly Hollywood Gelato at 1936 Hillhurst, Gelato Bar is the second gelateria from Nancy Silverton's sister Gail Silverton, with the first location in Toluca Lake. Silverton will open early in the morning with espresso and pastries -- or have an Italian breakfast, complete with gelato.
***
Mooi Raw/Vegan Restaurant opens May 20 at 1700 Sunset in Echo Park. The Echo Park/Silver Lake area has got to have the highest concentration of vegan restaurants in Southern California, and Mooi is already known for its vegan ice "cream" sold at Naturemart. 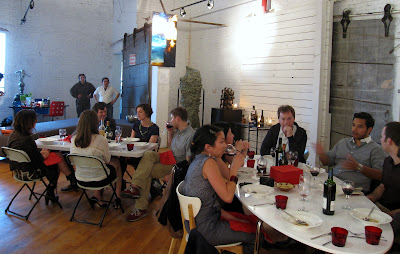 An airy loft is the setting for the Daily Dose's supper club.

The Daily Dose coffeehouse is opening on Industrial St. downtown within the next month, in the building next to Church & State. Downstairs, a small coffee bar on a picturesque brick alleyway will offer coffee, breakfast and simple lunches. Upstairs is the no-name supper club, which will serve tasting menus in an artist's loft four nights a week at $35 for dinner. It's the brainchild of Sarkis Vartanian, who's working with chef Christian Page. Here's more on the concept from Feast.
***
Early reviews are coming in for Radhika's, which soft-opened on Mother's Day in South Pasadena. "Good Indian food for people who don't like Indian food" is not a reassuring opinion, but I never take Yelpers' words for it, so I'll be in soon to try it out for myself.
at 10:50 PM

Taken from the linked article:

"Because the address is 1936 N. Hillhurst Avenue, Silverton says she'll price everything based on 1936 economics until the official grand opening, which is TBA. Exact prices are yet to be set while Silverton conducts some research, but imagine gelato and coffee at Depression Era prices, which will be less than what it costs to feed the meters on Hillhurst for 15 minutes. And this treat comes without the guilt trip from your Depression Era grandparents about what they had to do to get some lousy ice cream back then."

Actually, I stopped by on Friday and they were giving mini-cones for free. All the flavors were out, but at least for now, they won't have espresso, which means none of their amazing affogatos.

I invite you to see my post, I hope you will find interesting too.